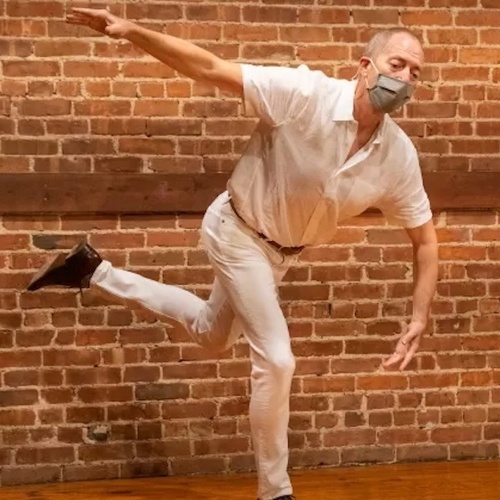 David Parker & The Bang Group will be in residence at The Dance Hall creating new work and sharing a performance with the community.

Choreographer and founder of The Bang Group, David Parker, has diversified the root impulses of percussive dance embracing a full-bodied, and wide-ranging vision of dance and rhythmic expression that makes room for humor, classicism, drama, and a brawny intellect.

The Bang Group was founded in New York City in 1995 and have toured and performed widely throughout North America and Europe. TBG has been generously supported by The Jerome Robbins Foundation, The Frederick Loewe Foundation, the New York Department of Cultural Affairs, The Doris Duke Foundation, and many more.

David Parker is a Guggenheim Recipient as well as awards and citations from Art+Action, Dancers Responding To Aids, the Kurt Joss Awards, and the Contemporary Choreographic Awards in The Netherlands. It is presented regularly in New York City by New York Live Arts and its predecessor Dance Theater Workshop, Danspace Project, Dance Now NYC, Symphony Space and The Harkness Dance Festival among many others.

The Bang Group is best known and loved for Parker's vivid, funny and loving re-imagining of The Nutcracker entitled Nut/Cracked which is a comic/subversive, neo-vaudevillian, is now celebrating its 20th Season.

"You never know what will happen next, but when it's over you find a passionate declaration of naivete in the best sense: innocence regained." — Alastair Macaulay, New York Times