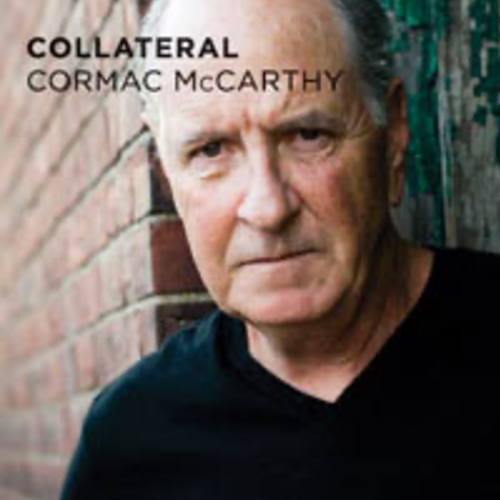 "A distinctive songwriter with a warm, powerful, inherently melodic baritone, a fine guitarist and a devastating wit ... enormous writing gifts, capable of putting chills into your spine or a silly grin on your face..." -

Cormac McCarthy made his singing debut on WKRC Radio in Cincinnati, as a three-year old belting out "Davy Crockett" on his father’s radio show. He returned to public performance some twenty years later, singing his own compositions with a bit more experience in his voice.

Born in Ohio, but rooted in rural New England since the age of ten, Cormac grew up in towns where the economies teetered on marginal sustenance from logging, and paper and woolen mills. His elementary school had the sixth, seventh, and eighth grades in the same room. Though the area was small, his musical influences were not: his father’s love for jazz and classical music introduced Cormac to everything from Errol Garner to Beethoven.

It wasn’t until his sister made a visit home from college, bringing an armful of recordings of Dylan, Baez, and Eric Anderson, that things clicked musically for McCarthy: he traded his clarinet for a Western Auto guitar, purchasing the Black Diamond strings across the street at the barber shop.

In his own college years, Cormac studied literature and music and took a great liking to the works of James Joyce and Mississippi John Hurt. He spent most of his time reading, playing guitar, and working in the local mills to pay for school. His college roommate, Bill Morrissey, helped encourage Cormac to make his music more public, and a stint of shared local gigs and storytelling marathons ensued. A trip west followed college, as did an array of different jobs including construction worker, truck driver, street singer, and a season as a migrant worker. Through his music Cormac has succeeded in bringing his lyrical magic to some of these rougher edges of life.

Cormac was nominated for both Outstanding Folk/Acoustic Act, and Outstanding Folk/ Acoustic Album by the Boston Music Awards. Cormac’s album, Troubled Sleep helped to kick off the Green Linnet Records' prestigious singer-songwriter Redbird Series devoted to the most creative of this generations acoustic musicians and songwriters. Troubled Sleepwon high praise and some overseas attention in the UK. Cormac was honored to be one of the artists asked to perform in Boston’s WUMB Folk Radio 10th Anniversary Celebration. He has been invited 3 times to the stage of the Newport Folk Festival, and twice to appear on NPR’s "Mountain Stage" Live radio show. A fan favorite and regular at the Hartland Folk Festival, and a frequent special guest to many of the performances by the most popular musician’s of the genre. His talents as an on stage humorist have been well remarked upon over recent years, and gave cause to have him invited to headline for the Night of Humor and Songwriters in Boston’s Somerville Theater. Cormac is regarded by fellow musicians and fans alike as one of New England’s finest songwriters. He writes and sings of a heartfelt, sometimes funny, sometimes desperate, sometimes glorious world of common people, struggles, hope, relationships, madness, and love. He sings the poetry of real life with a silky baritone voice and just enough grit.

Picture Gallery Blues has been call called a masterpiece. The release of Curious Thing and now Collateral are also a masterworks to be shared with all who have come to know and treasure Cormac’s songwriting and delivery.

Presently, Cormac and his wife Sammie Haynes live in a small town in southern Maine adjacent to the lively Seacoast arts scene centered around Portsmouth, NH.