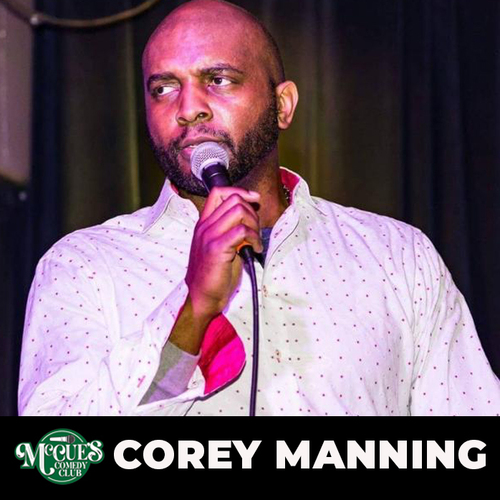 A Comedian by Night known for his “slick, upbeat, funny, over-the-top comedy,” Corey Manning has headlined The Apollo, is currently streaming in Amazon Prime, appeared on NBC’s Family Feud with Steve Harvey, and showcased in Jamie Foxx’s Lollapalooza's New Faces in Comedy.

Casey McNeal (“Addicted to Disorders”) is a Boston comic and humorist who regularly appears in Clubs throughout New England and New York. Sometimes observational, sometimes absurd, but always told through the lense of his mental hangups, his comedy appeals to those who have hangups, and those who like to laugh at his hangups. He has opened for legends like Sam Kinison, Margaret Cho, Kevin Nealon, Judy Tenuta, and Cathy Ladman, among others. He was a Finalist in the “NBC Tonight Show Comedy Challenge,” and has appeared in the “Boston Comedy Festival,” the “Mutiny Radio Comedy Festival,” and the “NY Underground Comedy Festival.”

Liam Hales is one of the biggest up-and-coming comics in the world right now…literally. A mountain of a man, he views the world through the lens of a ferocious Teddy Bear. He brings an infectious smile and energy with him to the stage.

He’s been doing stand up since college and like a fine wine is getting better with age. Originally from NH, he’s now back home in the Granite State after 15 years in Los Angeles.

Sit down, unwind and laugh with the Big Guy!