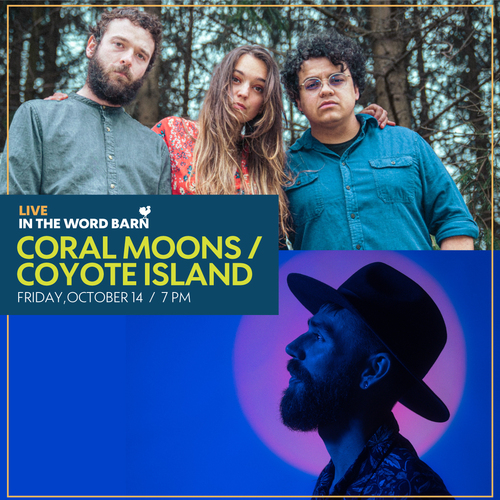 Coral Moons brings their signature blend of retro-rock and surf-pop to the indie stage, drawing influences from Maggie Rogers, Lake Street Dive, and the Alabama Shakes.

In August of 2021 the band released their highly anticipated debut album Fieldcrest: a full-length LP produced by Sam Kassirer of Great North Sound Society (ME), best known for his work with Lake Street Dive and Josh Ritter. The release led them to stages around New England and beyond, playing Levitate Music Festival, Boston Calling and opening for numerous nationally touring acts including Ripe, David Shaw (Revivalists), AHI, and Motel Radio.

Fieldcrest is a departure from the band’s early work but maintains the identity that makes them unique. Coral Moons’ debut record was born in the studio which allowed them to explore the depths of their sonic palette through dense synth pads, exploratory drums tones, and nostalgic songwriting. Fieldcrest is an album that focuses on the human experience while exploring many familiar topics such as childhood memories and daydreaming.

Coyote Island is the musical vision of producer/songwriter and multi-instrumentalist, Mike O’Hehir. For many years Mike travelled the country with guitar in hand collecting sounds and ideas. Upon returning home to Maine, he began the process of pouring his heart into recordings.

With roots in folk music, the sound quickly expanded into a new genre-bending realm of psychedelic indie. Mike assembled a band of brothers in order to capture the expansive soundscape in a live setting. From this, Coyote Island was born.

With the release of their first hit single “Here Before”, the band quickly gained fans around the globe. Their live performance has been called both “electric” and “transportive”. With good vibrations, dancey grooves, and tropical psychedelia, Coyote Island offers you a sonic vacation."