Come On Up To The House: A Songwriting Showcase

Come On Up To The House: A Songwriting Showcase 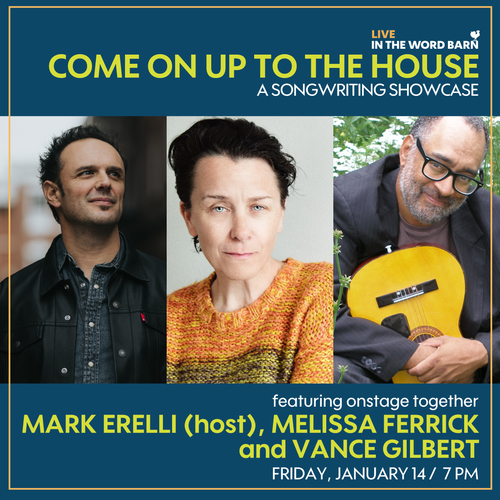 Join us for our brand new series: Come On Up To The House: A Songwriting Showcase as we host Mark Erelli, Melissa Ferrick and Vance Gilbert all on stage together.

This on-going concert series will feature some of the best songwriters on stage together where they will swap songs, share stories, jump in and back each other all in front of you, the audience - providing an intimate exchange and spontaneity that makes for some of the best magic and memorable concert experiences.

Mark Erelli (host) has forged a colorful career by making the art of “being everywhere all the time” seem effortless. It’s hard to think of another artist who seems equally at home serving as a sideman for GRAMMY-winning artists like Paula Cole, Marc Cohn, and Josh Ritter, or producing albums for Lori McKenna, as he does writing and producing his own material, like 2019’s “By Degrees,” on which he was joined by a host of voices including Rosanne Cash and Sheryl Crow. That song was nominated for “Song Of The Year” at the 2019 Americana Music Awards, and served to reintroduce Erelli to a wider audience. And just in time, because his 2020 album Blindsided combines the exuberance of Erelli’s signature sound with the wisdom that comes with over 20 years of songwriting, capturing an artist at a point in his career where he is clearly digging deep and swinging for the fences.

Melissa Ferrick is a Professor of the Practice at Northeastern University in the Music Industry Department at the College of Arts Media and Design. They've released seventeen albums over the last twenty-five years and has won numerous awards for songwriting, production, and performance. From 2013 - 2019, Melissa was an Associate Professor of Songwriting at Berklee College of Music. They hold an Ed.M from Harvard University. Regarded in the industry and by their peers as one of the most prolific and hardworking artists in the business, They have shared the stage with Morrissey, Joan Armatrading, Weezer, Tegan and Sara, Mark Cohen, Paul Westerberg, Bob Dylan, John Hiatt, Ani DiFranco, k.d.Lang, Suzanne Vega, Shawn Colvin, and many others.

Can something be wry, aching, hysterical, evocative, provocative, fun, beautifully sung, and consummately played all at once? That would be Vance Gilbert. With the generous assistance from a varied list of super-respected guests— bluegrass boys Darol Anger and Joe Walsh Jr., jazz sax player Grace Kelly, country rock hero Roy Sludge, and guitar mainstay Kevin Barry—this talented man’s musical truth plays out shamelessly on his newest BaD Dog Buffet. Vance truly happens live. In fact, he developed his reputation with his jaw-dropping, funny, devastating, and gorgeous live performances. Arlo Guthrie, Anita Baker, the late George Carlin have all requested Vance to be added to their bills. He exploded onto the scene in the early 90’s, with buzz spreading quickly. After opening Shawn Colvin’s 1992 Fat City tour, he took much of America by storm and by surprise. “With the voice of an angel, the wit of a devil, and the guitar playing of a god, it was enough to earn him that rarity: an encore for an opener,” wrote the Fort Worth Star-Telegram in its review of a show.