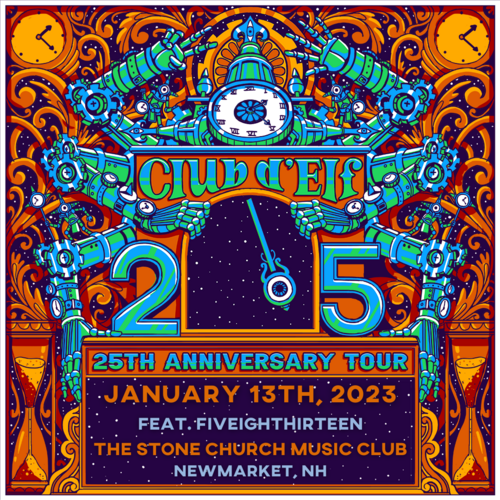 twenty five years with its mesmerizing synthesis of Moroccan

d'Elf performance features a different line-up, drawn from a

constellation of some of the most creative improvisers from the jazz,

DJ, rock & world music scenes of Boston, NYC and beyond. The band's

music draws from a startlingly wide spectrum of styles, including

tutelage of member Brahim Fribgane (who hails from Casablanca) the

band has absorbed Moroccan trance music, which is now an essential

part of the mix. Diverse audiences are drawn to Fribgane’s mesmerizing

oud stylings, and Rivard’s commanding playing of the Moroccan sintir.

together the band’s various influences.

In April 2022 the band released its latest album, 'You Never Know',

which rose to #2 on the Relix chart. The record unfurls upon

through trance epics that reimagine Boston as a city of bazaars. Club

influences, with half the album being covers of gnawa, Miles Davis,

half consists of original music inspired by Rivard's personal journey

into darkness following a near death experience in the remote jungle

of the Peruvian Amazon.

"You Never Know is a wide ranging romp, full of serenity, chaos,

“Crushed between the borders of Morocco, jam band land and the kingdom

“Sounds like the lovechild of Pink Floyd and George Clinton, dropped

Fiveighthirteen brings the otherworldly to the stage as they explore the organic aspects of electricity through psychedelic post-rock. Expect cinematic soundscapes alongside hypnotic downtempo grooves, improvised music alongside meticulously detailed compositions, and breakbeats alongside eerily beautiful minimalism.

"One of the most interesting, imaginative, and challenging records to come out of the Seacoast, maybe ever." - Chris Hislop, Spotlight Magazine

“Fiveighthirteen’s latest work juxtaposes a rich historical knowledge of musical traditions like jazz, electronica, indie rock, and ambient, while pushing each genre to its most radical thresholds. Throughout the album, experimentation with technological form is pitted against the stability of some seriously deep grooves. Sensations of sonic entropy remain unresolved throughout, giving the work its cutting edge. Virtuosic studio musicianship revels in automation while dusty loops convey intimacy. The result is exceptional.”