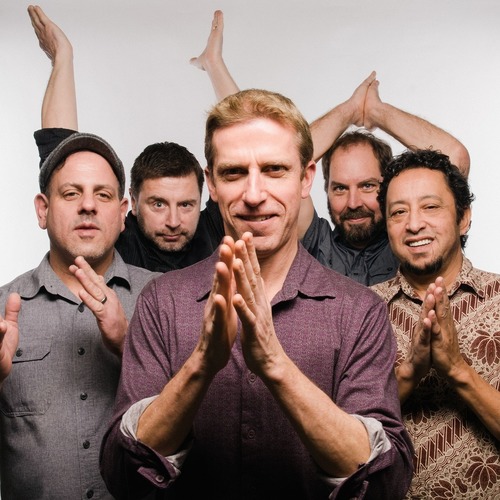 Limited Tickets are Available in groups of 4 & 6

To To the naked eye, Club d’Elf looks exactly like a world-class instrumental band: five or six fierce players laying down heavy grooves and exploratory solos on distinctive original material, as audience members dance or listen in rapt attention. To its fans, however, and its large and colorful cast of musicians, D’Elf is all that and much, much more. 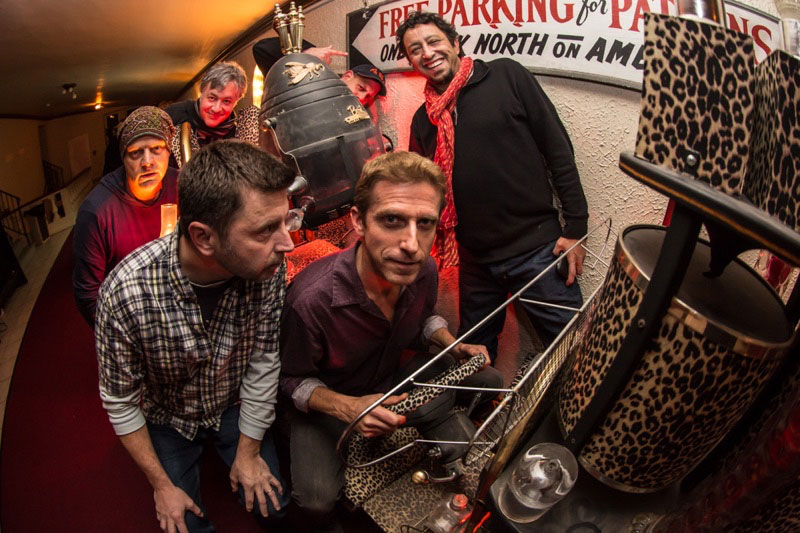 The paradox and the power of the unusually named Club d’Elf become increasingly clear through repeated encounters. Unlike almost any other band, D’Elf’s personnel changes radically from show to show. Fans have their favorite configurations and players, but unlike groups where musicians’ tenures are finite, D’Elf-ians revolve in and out, reappearing in endless combinations. Beyond the cavalcade of characters, the music itself is in constant flux. Individual songs can vary dramatically from performance to performance as new alignments of players make every moment fresh. No two sets are alike. Yet the feeling and philosophy that animate D’Elf remain consistent, the product of the vision and dedication of leader Mike Rivard (aka Micro Vard) and the ongoing contributions of his talented collaborators. Devoted fans have been setting their clocks by the group’s bimonthly appearances at their home base, the Lizard Lounge in Cambridge, Massachusetts, for twenty years now, and the message has traveled around the world.

Club d’Elf began in 1998 at the Lizard as a kind of controlled jam session, featuring Rivard’s friends and associates from various bands. Mark Sandman, the leader of Morphine, was an important catalyst, suggesting that it was time for Rivard to form his own band. An in-demand sideman, the bassist had earned notice with Jonatha Brooke, the Walkers, the Either/Orchestra and a Sandman side project, 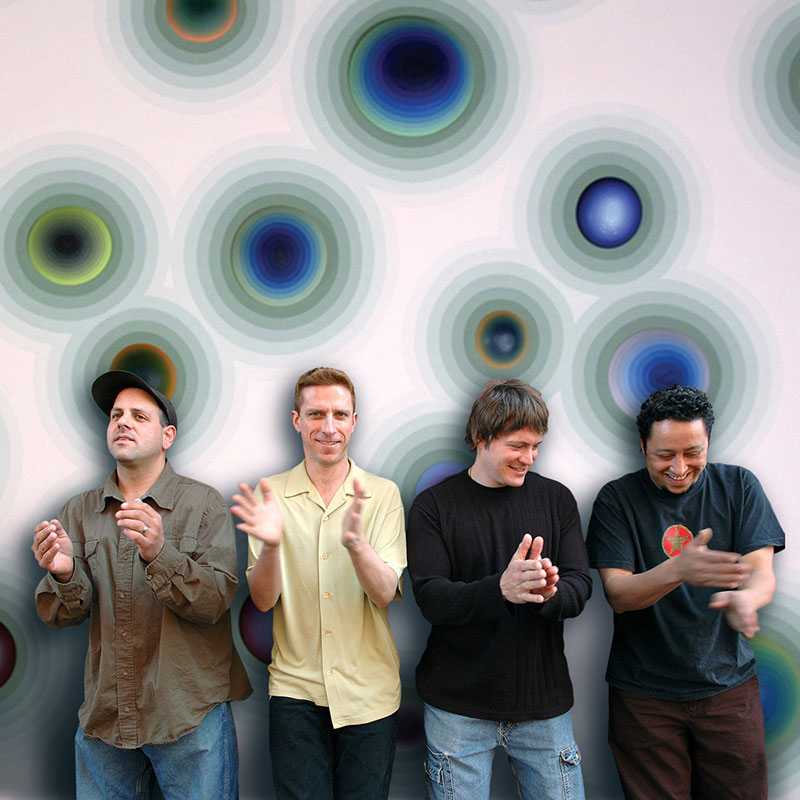 Hypnosonics. He envisioned a band that wasn’t built around the specificity and spotlight that frontmen usually demand, but one that would follow spontaneous cinematic soundscapes created by each member of the collective. Out of the original D’Elf jam pool emerged a core group, usually augmented by one or two other players from a rotating cast. The core was eventually honed to its essentials: Rivard and drummer Erik Kerr, followed eight years later by drummer Dean Johnston.

“I didn’t want to feed the musicians with too many ideas of what the music SHOULD be,” says Rivard, “because what keeps it fresh and alive for me is me being astounded by what other people come up with. The thing that really excites me is somebody coming in and taking over, taking us down avenues we haven’t traveled before.”

After establishing a devoted local audience, D’Elf’s reputation began to spread via a series of CD releases, widely circulated “bootleg” recordings, and shows on the road. The first out of town forays began with NYC’s fabled Knitting Factory in 2000 and van tours around the Northeast. Japan has welcomed the band for five tours, including a memorable performance at Mt. Fuji. D’Elf has also gone north to the Festival du Monde Arabe in Montreal, and south to Ecuador Jazz. Over the years, critics have knocked themselves out looking for superlatives in reviewing D’Elf’s live performances and recordings.

A ring of startlingly diverse players surround Rivard and Johnston, musicians who have toured with the biggest names in the business (from David Bowie to Mary Chapin Carpenter to John Zorn to Paul Simon, for starters), or led their own successful bands. Regular collaborators include John Medeski, Duke Levine, Alain Mallet, Paul Schultheis, David Tronzo and Mat Maneri. For all contributors, D’Elf is a special place, where they are invited to transcend ordinary constraints. Beneath its luxe surface lies a multifaceted reality, anchored in the band’s unique

organizational dynamic and unconventional mission. Non-musical influences such as sci-fi writer Philip K. Dick’s themes of parallel dimensions and alternate universes come into play through the medium of DJ Mister Rourke. He serves multiples roles, as jester; disrupter; house surrealist, bringing a psychedelic and Dadaist perspective with his ability to drop the perfect sample into the mix.

The D’Elf environment is fertile in many ways. At the bottom IS the bottom. On electric and acoustic basses and Moroccan three-string sintir, Rivard, a Minnesota native, lays down a rock solid foundation no matter how syncopated and complex the music becomes. His compositions are written from below and create spaces where the superb guitar, keyboard, percussion, string, turntable, and horn players feel empowered to carve their own paths. Ever-changing combinations of bandmates inspire these fiery and intuitive players to fearlessly explore new approaches.

Within deceptively simple structures, the rhythm duo creates a seamless flow from meter to meter, groove to groove, in a rhythmic sleight of hand that can leave the listener wondering, “How did we get from point A to point B?” At other moments, telepathically or through sound and sight cues, the ensemble magically changes directions with such precision that it sounds pre-planned. “Rather than for the music to be jarring,” explains Rivard, “it should be like a sand painting that’s continually transforming from one scene to another, disparate but connected.” 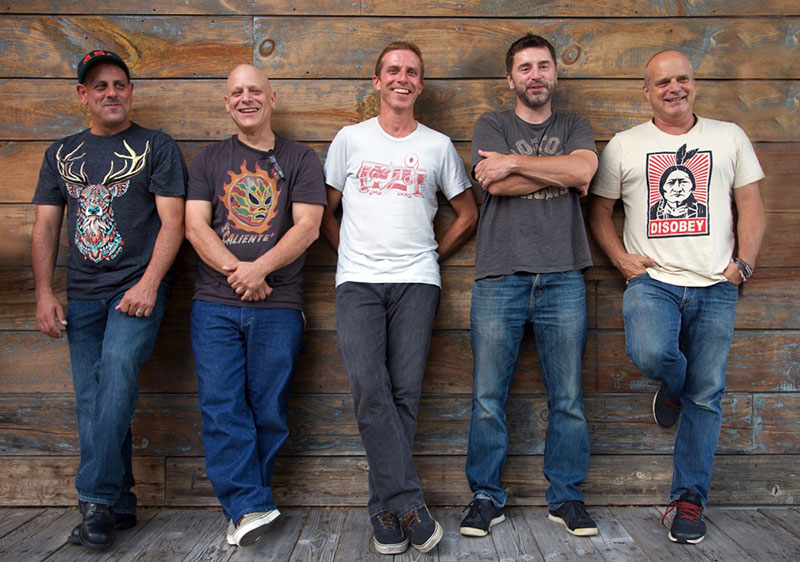 passion for trance music. In many cultures – even Western cultures, on occasion – music and dance are recognized as paths to transcendence. “Trance music in all its aspects has always been the underlying aesthetic of the band, that sense of losing time.” As a player with wide-ranging tastes and abilities, and a thinker with interests ranging across the arts and ideas, Rivard understands both the power of the active mind and the challenge of releasing oneself from thought. At the very core of D’Elf’s mission is its leader’s desire to allow himself, his musicians and his audience, to enter a place where there is no time and space, no ego, no limits. “In these troubled times, the ability to enter into that timeless realm is about healing,” Rivard notes.

Trance elements manifest themselves most clearly in D’Elf’s incorporation of Moroccan music, in particular, the music of the Gnawa, a pre-Arabic culture in North Africa, which stands among the world’s great trance musics. Early in the history of D’Elf, the rotating cast began featuring Moroccan players, including percussion/oud player Brahim Fribgane and later, sintir master Hassan Hakmoun. Over time, the Moroccan elements have been woven deeply into the fabric of D’Elf, reinforced by key performances before Moroccan audiences, whose knowing reactions cemented this direction. The trance-inducing properties of D’Elf’s Moroccan music have even unleashed startling responses in non-Moroccans, accessing some hidden universal part of their psyches. On another continent, Rivard’s travels in the Amazon jungle in Peru have added further insights into the links between music and trance.

No less important are the influences of more familiar touchstones of musical transcendence, including James Brown, Sun Ra, Fela Kuti, John Coltrane, the Grateful Dead, Miles Davis, and Remain in Light period Talking Heads, all of whom conjure the power to transcend time and space. Rivard the bassist is a particular fan of the nexus between the physical and the emotional found in the butt-shaking grooves of James Jamerson, Bootsy Collins and Larry Graham. 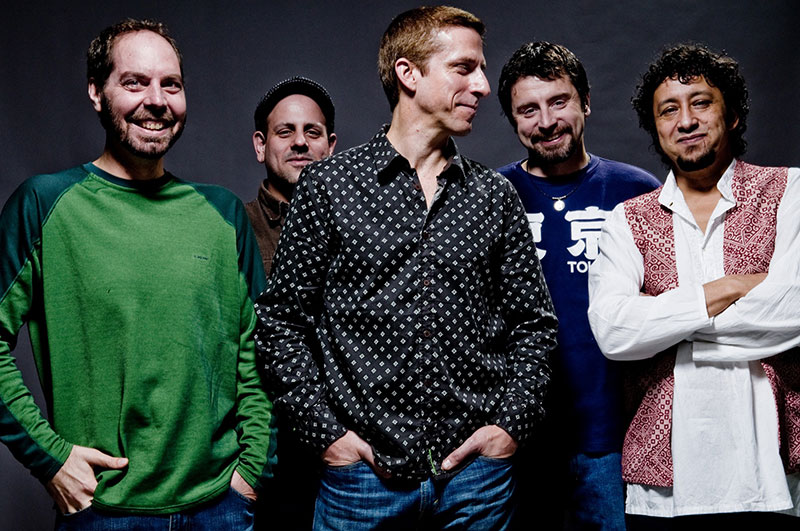 “The music that I first was inspired by as a teenager was the Grateful Dead, and that was when I originally became aware of music as a means toward heightened consciousness. I felt how the audience and the band formed a symbiotic relationship with the energy flowing back and forth, and that was a powerful revelation. From there I got into Miles and Coltrane and then groups like the Art Ensemble of Chicago and Sun Ra where the performance is a ritual, not just entertainment. My intention is to affect people on a deeper level. I want it to be entertaining, but also for people to look back on it say – yeah, that was heavy.”

Club d’Elf’s desire to move beyond the world of appearances and venture into the realm of the eternal is at the center their music. This metaphysical quest is embodied – much to listeners’ benefit – within one of the best bands you will ever hear – and one that rewards repeated listening. You can enjoy D’Elf any old way you choose it, but make no mistake:

D’Elf intends to move your booty, excite your intellect,and ultimately join you in transcendence itself.