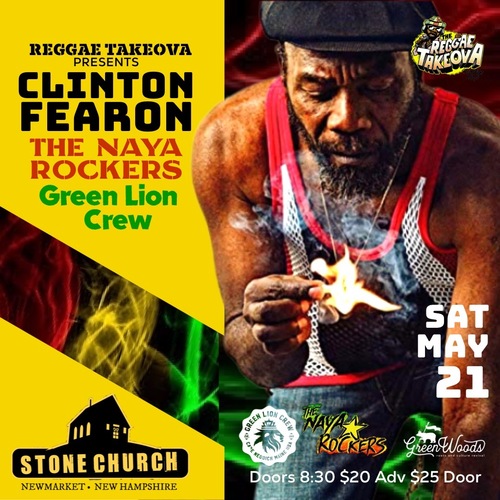 My music is roots reggae from the island of Jamaica. I grew up deep in the hills, up in St. Catherine, surrounded by nature, beauty and hard work. Even as a child, I knew I wanted to be a musician and began my career singing in church and at school, and eventually built my own guitar! As a teenager, my journeys took me to Kingston where I met many musicians and eventually began writing and recording music. The Skatalites, Motown artists and Jamaican musicians who came before me all influenced my music.

I write from my heart. The world is full of inspirations…nature, people, politics, love. I write about them all. My music is good for the soul - always with a message of hope and betterment for tomorrow. It’s good for dancing, good for listening and appeals to the young and old.

Clinton is one of the Original members of The Gladiators. Gladiators are a legendary Roots band.

About The Naya Rockers:

The Naya Rockers are a backing band, anchored by US-based drummer Nathan Sabanayagam, Bassist Nate Edgar and keyboardist Cameron Greenlee. This musical collaboration has been evolving for the past 20 years and they are complemented by an international pool of singers and musicians. The band is also heavily involved in music production and works in tandem with the Naya Records independent record label. There have been collaborations in the works with all the artists on this tour with releases slated for early 2022.

This team is dedicated to bringing the highest level of musicianship and stage show, together and individually the Naya Rockers have spent the past two decades touring and recording with the foundation of reggae including: , The Skatalites, Stephen Marley, John Brown’s Body, Kiddus I, Barrington Levy, Bushman, Earl Chinna Smith, Ernie Smith, Big Youth, Junior Reid, The Congos, Johnny Clarke, Ken Boothe, Mikey General, Tinga Stewart, The Toasters. And in addition to the foundation artist, the Rockers have also bakced next generation including: Kenyatta Hill, Asadenaki Livingston, Blakkamoore, Addis Pablo, Iba Mhar, Hector Lewis and Jah’Mila Smith

About Green Lion Crew: From an early age, Green Lion Crew’s Zeke Stern and Dana Knowles became students of the sounds of Caribbean Culture.  After originally starting as a band, they began DJing in the early 2000s after creating an obsession with Jamaican sound systems.  Before long, the two decided to pursue the art of music production under the name Green Lion Crew, committing to give back to the music they loved so much.

The US based producers traveled frequently to Jamaica and the Virgin Islands to master their craft. Their pursuits and passion for the music lead Stern and Knowles to collaborate and become friendly with massive stars in the reggae genre including Collie Buddz, Chronixx, Kabaka Pyramid, Beenie Man, and more. The duo’s lofty ambitions and consistent independent releases fuel their efforts to stay on the cutting edge of modern reggae’s sharpest performers. Stern and Knowles draw from their crate digging days, creating a niche sound by intertwining the classic sounds of reggae and dancehall with the youthful energy of hip hop and EDM.

Though their productions are born under a unique vision, the true thrill of Green Lion Crew’s music is in their live performance. In true fashion of the sound system culture, Green Lion Crew captures the audience with their addictive beats and rhythms, often having a guest vocalist double as the emcee and toastmaster. They have opened for artists like Stephen Marley, Lee “Scratch” Perry, and John Brown’s Body to name a few. Their live performances pump adrenaline through the veins of their venues from the first drop of the beat to the last crash of the cymbal at the end of the night.

Since their inception, the music of Green Lion Crew has been heard on ESPN, Vice TV, and the X-Games. The group has been supported by tropical tastemakers like Walshy Fire of Major Lazer, David Rodigan from BBC 1xtra, and Protoje’s DJ, Yaadcore from Jamaica. Back home in the States, the group has maintained a weekly reggae radio show and has received relentless support from local media outlets WXGR, WUNH, and Gatehouse Media.

Green Lion Crew not only promotes appreciation of the reggae culture, but is committed to sharing their love for the genre with listeners across the world.