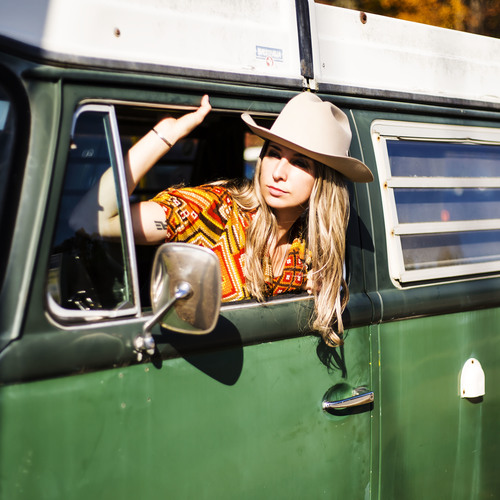 Charlie Marie makes classic country music for the modern world. It's a sound that bridges the gap between Nashville and her native Rhode Island — a blend of old-school traditions and fresh perspectives, fused together by a trailblazer who's been writing songs since her teenage years.

Raised in Providence, Charlie Marie fell in love with country music at ten years old, after a music teacher compared her voice to the timeless croon of Patsy Cline. She began riding horses at the same time, and the two disciplines went hand-in-hand. While heading to a local horse farm every week, a wide-eyed Charlie would listen to country songs in the car, absorbing the sounds of 1990s hit-makers like Alan Jackson one minute and mid-century icons like Loretta Lynn the next.

By sixteen, she was fronting her own country band, playing songs like "Crazy" and "You Ain't Woman Enough (To Take My Man)" at fairs and festivals across New England. Her voice — brazen one minute, hushed the next — was commanding, but it was her biographical songwriting — a skill she truly developed after relocating to Nashville for college — that set her apart. Charlie wrote songs about her own experience, portraying herself not as some guitar-strumming southern belle, but as a proud outsider who had fallen in love with country while living far from the genre's Bible Belt headquarters. While living in Tennessee, she turned that unique approach into songs that saluted her influences while still exploring new territory.

Ramble On, Charlie Marie's full-length debut, shines a neon light on her updated brand of classic country. It's an album filled with everything that first endeared her to the genre itself, from honky tonk piano and twangy Telecaster guitar to rich storytelling, swooning pedal steel, and nuanced nods to her heroes. Recorded in Nashville with an all-star band whose members have performed with Margo Price, Emmylou Harris, Rodney Crowell, and other torchbearers of classic cool, Ramble On cements Charlie's status as one of country music's newest old souls.

"I wanted the record to sound like if Patsy Cline and Dwight Yoakam had a child," she explains. "It doesn't just symbolize everything I'm working toward; it symbolizes where I come from, too."

Several tracks were written in Nashville, where Charlie Marie became a fixture at local institutions like the HonkTonk Tuesday Night concert series. Others were penned after her return to New England. Together, they form a song cycle about pain, heartbreak, determination, and inspiration — coupled with rich character studies and lefthand turns that often lead to new, unexpected destinations. "El Paso" is a Texas-flavored breakup ballad with a twist — "he left me for a man," she sings in the chorus, as a steel guitar weeps behind her in sympathy — while "40 Miles from Memphis" (co-written with the Dove Award-winning Cindy Morgan) is a defiant dismissal of the smoke-and-mirror emptiness of fame, set to a soundtrack of Stax-worthy soul and Beale Street blues. On "Heard It Through The Red Wine," Charlie uncovers a lover's infidelity by opening up a bottle of Merlot, getting him drunk, and watching him spill his secrets. "That bottle made an honest man of you," she sings, peppering a would-be traditional drinking song with more twists than an Old Fashioned. It's that rare skill — the ability to both honor and subvert the country tropes that made her a lifelong fan of her heroes — that gives Ramble On its sly strength.

Produced by Tyler-James Kelly (the frontman of Providence-based blues-rock band The Silks) with assistance from Brian McKinnon and Ben Klise, Ramble On arrives on the heels of her 2019 self-titled EP. "Listening to Charlie Marie’s new self-titled EP is falling in love with country music all over again," Saving Country Music wrote in a rave review, praising the record whose songs would grace taste-making playlists like Spotify's "Indigo," Apple Music's "Southern Craft," and Tidal's "Country Calm. Two years later, Ramble On continues drawing a line between the modern day and country music's golden years, highlighting a songwriter who isn't just steeped in tradition, but adds her own contributions to the classic cannon, too. It's a snapshot of an artist in motion.

"Pursuing music has been an adventure for me, and I recognize that in other artists' pursuits, as well," Charlie Marie explains. "Sometimes you’re tired and unsure of what lies ahead, but you’ve come too far to quit. The only thing you can do is continue chasing the dream."