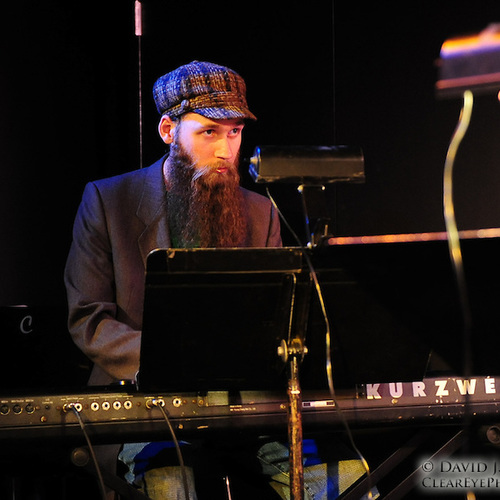 MASKS ARE REQUIRED INDOORS while in motion for patrons and staff.

Effenberger/Kiefner/Adler is a collaborative trio that explores the possibilities of collective improvisation. Blending acoustic and electronic elements to form its own sonic language, E/K/A navigates original compositions as well as material from luminaries like Carla Bley and Ornette Coleman. The music ranges from raucous dustups to more contemplative soundscapes, with an emphasis on atmosphere, communication, and the great Unknown.

Mike Effenberger is a recording and performing artist who has been living in the Seacoast since 2007. He received the Young Beacon in Jazz award from New School University in New York City, from which he graduated in 2005. Studying with diverse artists including Jane Ira Bloom, Reggie Workman, Fred Hersch, and Joanne Brackeen, Mike has curated an unmistakably individual voice that draws on gospel, American minimalism, jazz, and 20th century music.

Brian Shankar Adler is a multidisciplinary drummer, percussionist, and composer. His work transcends the terrain between genre and geographic region, asking: how can we find connection through rhythm? Adler has been described as "a polyrhythmic force.. New York City gritty yet still somehow capable of evoking the delicacy of a summer breeze" by Brad Cohan of JazzTimes.

Scott Kiefner is a bassist currently living in coastal New Hampshire. After graduating from McGill university, he returned to New England and has since become a busy member of the music scene. He performs regularly with the Soggy Po Boys, Sojoy, OURBIGBAND, Javier Rosario Trio, and many others.