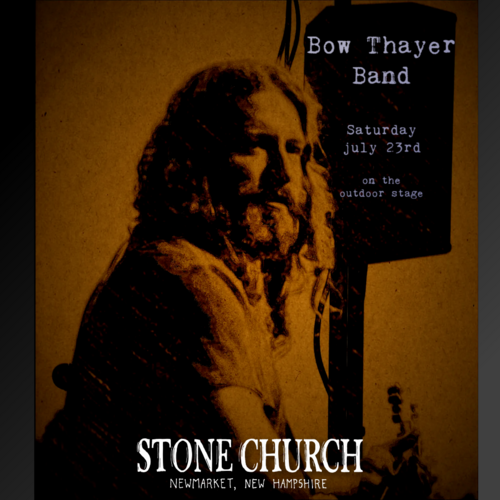 - All tickets are General Admission

As Seven Days puts it, "Bow Thayer has been kicking up a beautiful racket in Vermont for many years now." Indeed, Bow has been making a racket for as long as he can remember. Making music is who he is. Bow made a name for himself in Boston with 7 League Boots, a rock/reggae band that shared the stage with the likes of Fugazi, The Mighty Mighty Bosstones, and Pearl Jam. 25 years ago he made a life-altering decision to leave the city for the Green Mountains of Vermont. It was there that he explored the Delta blues playing slide guitar for the original Elbow and began a relationship with the banjo - both in the bluegrass group, The Benders, and on his own — that continues to this day. Bow combined these instruments into the Bojotar, a hybrid he designed that incorporates elements of the banjo, resonator guitar, and conventional guitar and was sold in a limited run by Eastwood/Airline Guitar Company. As No Depression put it, "You want inventiveness....I offer Bow Thayer."

Bow’s music is always evolving and unpredictable. After recording his classic Americana album, Spend it All, with Levon Helm on drums, Bow forged a daring music path that has explored folk, prog, blues, world music, improv and psychedelia on his journey to bring backwoods music into the present. His new album, The Book of Moss, was born from an acoustic weekly gig that Bow played with his bassist, Alex "Al" Abraham, and they were soon joined by local percussionist, Steve Ferraris. But after recording a demo, everything changed. Al took his own life. Once Bow could listen to what they had from that session, he realized he could finish the album. But it was not an easy album to make. Unable to use the conventional approach, this album had to be built from Al's upright bass lines. Bow brought on his longtime musical partners, Jeff Berlin, to add drums, and three-time Grammy winning engineer, Justin Guip (Levon Helm), to do his magic.

As for the songs themselves, Bow acknowledges "they are about as 'Vermont' as I can get. They sound to me like they literally grew up out of the rocky soil of the Green Mountains. They contain all the trials and tribulations you find living here, as well as some global perspective from our little weird bubble of a state."  The Book of Moss, just like A Better Version of the Truth that was also released after Al's death, is a testament to a talented and kind artist who suffered silently, and showcases the extraordinary bass tracks he left behind.

While out on the road, Bow had the joy of introducing his music and the Bojotar to fans and friends alike, including some of his peers and heroes - Bela Fleck, Richard Thompson, James McMurtry, John Hiatt, Booker T. and Warren Haynes. At home during the pandemic, Bow joined forces with Val McCallum, Jackson Browne's guitarist with a damn fine voice, to co-write a gorgeous and inspired set of songs under the moniker Beau Bow de Lune. A full-time artist, Bow has devoted his life to spreading his tales, truths and fantasies about the human condition wherever he goes and invites you to catch an earful.