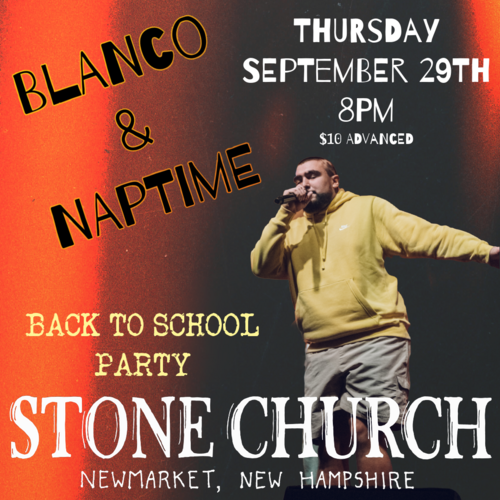 A melting pot of musical styles and proclivities, Blanco is a project spawned from an increasing desire to create and perform music during the pandemic-induced absence of live shows. Consisting of Ryan Farinas (vocals), Matt Oriente (saxophone), Seamus Connelly (guitar), Kai Dimuzio (bass), and Shane Jozitis (drums), Blanco got its initial kicks at the Freedom Cafe in the fall of 2020, a leap of faith that has taken them to repeat appearances at Newmarket’s Stone Church, Cambridge MA’s Middle East, and the same stage as hip-hop star Tai Verdes. Farinas’ background in hip-hop and R&B combined with the rest of the band’s studies in jazz and alternative rock result in a sonic smorgasbord offering a little something for everyone who attends a show. The band paints their performances with a bright color palette, effusing exuberance, emotion, and whimsy into the atmosphere each time they take the stage. Their name – chosen shortly before their debut performance – is an ode to their first fan and the band’s official mascot: Farinas’ white pitbull, Blanco.