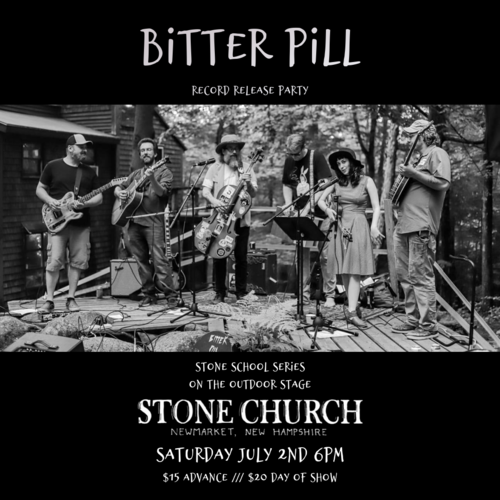 We spent this past winter recording, mixing, and mastering our new record, "livin aint cheap, dyin aint free" and we are so pumped to celebrate it at the world famous Stone Church in Newmarket, NH!

In February 2020, we laid down tracks for our second record, “Desperate Times on the NH State Line” and in the middle of mixing it the world died. We were unable to do a live release show and spent most of the rest of that year locked down in our respective homes. Like everyone else we were depressed, streaming, eating fatty foods, smoking fatty fattys, but writing a ton. In the warmtimes of 2021 we got all the jabs and hung out on Billy’s porch jamming thru new and old tunes. We ended up playing about two dozen gigs that season. Those gigs and all of you fans helped pay for our studio time. Without all of you we would not be able to do what we do and we love you for it.

We will be playing the new record in its entirety and dig deep in our discography to bring you a great night of musics!

We are so damned excited to share this with you, so come celebrate with us!!

Self-described as “rhythm and bluegrass,” Bitter Pill is a tight-knit family, (literally father and daughter) who play a dark and anachronistic twist of folk, blues, jazz, rockabilly, and country. They released their first album, “Prepare Your Throats,” in the fall of 2018. A collection of traditional and original songs from the soundtrack of their staging of William Shakespeare’s violent, bloody, grotesquely ridiculous abomination of a play, “Titus Andronicus.” They released their second album May 2020, “Desperate Times on the New Hampshire State Line,” a whimsical collection of foot stompin’, hand clappin’, spirited cross-genre tunes. Now available for purchase and streaming on all the streamers.

Their third album, “livin aint cheap, dyin aint free” will be released this summer and they will be heading back into the studio to record their new children’s album, “Children of the Grim.” A neo-gothic musical play of original and traditional children’s stories, nursery rhymes, and folk songs will have it’s theatrical premiere in May at The Players’ Ring Theatre.

“Intriguing, creative, humorous, raw and not all that wholesome.” Modspoke.com

“This ain’t a slice of the floppy hat, fancy boots, folk boom throwback found at vacant pop-folk festivals ‘round the world. This is the real deal, punch you in the gut and keep you coming back looking for more goods.” Seacoastonline.com