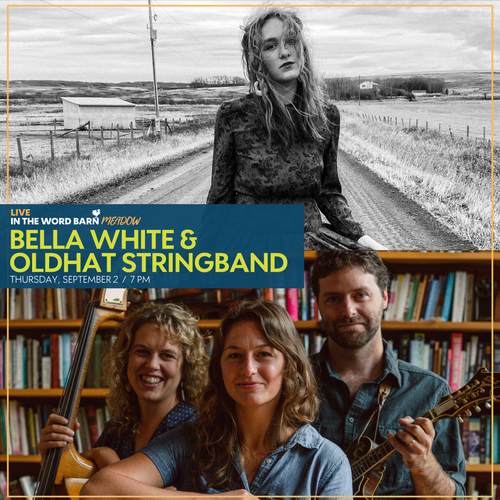 What happens when you combine an amazing new discovery with a Word Barn favorite band? You get a co-bill with Bella White and OldHat Stringband concert. Don't miss this one folks.

A truly original new voice in songwriting, Bella White creates an undeniable magic by mining the rare duality at the heart of her artistry. Although she hails from the Canadian city of Calgary, the 20-year-old singer/multi-instrumentalist grew up on the classic country and old-time music she first discovered thanks to her father, a Virginia native who played in bluegrass bands all throughout her childhood. On her debut album Just Like Leaving, White balances her old-soul musicality with a lyrical perspective that’s entirely of-the-moment, embracing an intense self-awareness as she documents her coming-of-age in real-time. “I’m still quite young, but I was very young when I wrote this album,” says the Nashville-based artist. “All of these songs came from processing my feelings right as I was experiencing certain things for the first time in my life.”

Produced by Patrick M’Gonigle of The Lonely Heartstring Band and mixed by Grammy Award-winning engineer Dave Sinko, Just Like Leaving bears a powerful authenticity that prompted Rolling Stone to praise White’s songwriting as “sublime Appalachian heartbreak.” In sculpting the album’s sparse but lushly detailed sound, White worked with a lineup of musicians she encountered through years of making the rounds at roots-music festivals, including Reed Stutz (mandolin, vocals), Julian Pinelli (fiddle, vocals), and Robert Alan Mackie (bass). “I met everyone by jamming together, which felt perfect for this album—I really wanted it to sound like friends making music,” says White, who plays guitar on Just Like Leaving. “The whole process felt very collective and collaborative, and everyone’s creative choices ended up shining through.”

Steve Roy is one of New England’s premier multi-instrumentalists, and has performed and toured with many of the acoustic world’s top acts.

Amanda Kowalski is one of the more sought after bass players in the worlds of bluegrass and old time music, and her rhythmic drive and energy on stage are second to none.