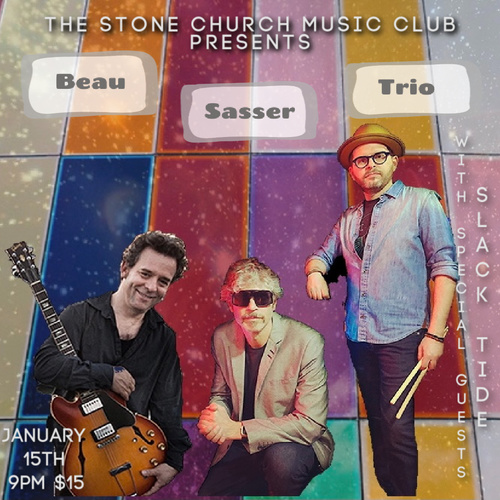 featuring Bill Carbone and Will Bernard

With a repertoire and shared vocabulary honed over more than a decade of every-Wednesday-night shows at Bishop’s Lounge in Northampton, MA, the Beau Sasser Trio turns a familiar genre into an exciting and inviting free-for-all out of which James Brown, Nirvana, Jimmy Smith, Ray Charles, Frank Zappa, and original tunes emerge. This January, they’ll be adding originals from Will Bernard’s Ancient Grains and Freelance Subversive releases as well.

Beau Sasser is a veteran organist and music personality whose career began in the mid-90s with prog-jamband and Wetlands-scene sweethearts Uncle Sammy. Later, Sasser linked with drummer Bill Carbone in the trio of jazz guitar Melvin Sparks. The pair can be heard on the posthumous Melvin Sparks Live at Nectar’s, recently released on vinyl by One Note Records.

Sasser worked several years in Soulive drummer Alan Evans’ Trio as well as in the band of singer/songwriter Ryan Montbleau, the funk/fusion band Kung Fu and countless others.

Though currently a New Yorker, guitarist Will Bernard's unique voice was formed from the rich cultural roots of the San Francisco Bay Area. Decades into a career in the groups of Dr. John, Charlie Hunter, Stanton Moore, Tom Waits, Dr. Lonnie Smith, John Medeski and countless others, Will’s guitar playing and composing drips with Bay Area Multi-Kultii, the loose funk of New Orleans, and a Downtown New York edge.

Bernard’s 2007 CD "Party Hats" as well as his 1997 collaborative project T.J. Kirk's If Four Was One were both nominated for Grammys, and he is nominated yearly in Downbeat Magazine's Critics Poll for "Best Rising Star" Guitar Player. Will is a regular fixture at New Orleans Jazz fest, Jam Cruise and other similar events, and has toured extensively in the US and Europe.

By day, Bill Carbone is the executive director of Teachrock.org, a non-profit foundation launched by Little Steven Van Zandt. By night, Carbone is a drummer described as possessing, “a certain undeniable and exciting recklessness reminiscent of Terry Bozzio in the Frank Zappa era.”

Bill Carbone came of age in the ‘90s New York Downtown jazz and jam scene, where every style of expression was fair game. Carbone spent several years working with jazz legend Melvin Sparks, has drummed for the half-century-strong jamband Max Creek for over a decade, co-leads the internationally touring Zappa organ tribute The Z3, has been the percussive spice for ROIR Recording artists 10ft Ganja Plant for over 20 years, and must have 1,000 Beau Sasser Trio gigs under his belt by now. Carbone has produced albums for Melvin Sparks, Max Creek, Buru Style, and The Z3 and appeared on recordings by dozens of others.

﻿*No refunds* unless you are experiencing symptoms of COVID-19.