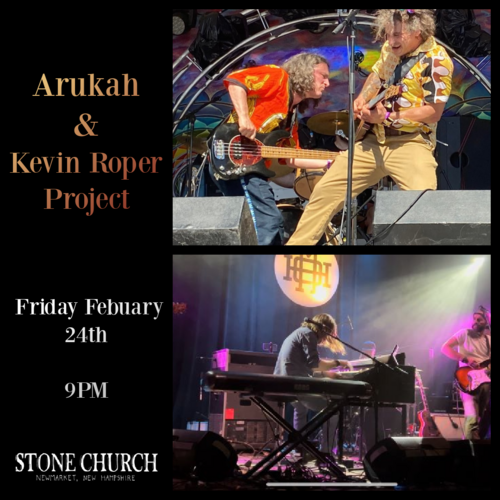 Arukah is a three-piece Massachusetts-based original jamband that has quickly gained a loyal and ever expanding following in New England since the summer of 2021. Their high energy shows have generated a strong word of mouth buzz across the region.

A certified super group made up of musicians from various well-established bands, an Arukah show features top-shelf musicianship showcased in jaw-dropping solos and improvisations, multitudes of grooves that keep the dance floor hopping, and unique songwriting approaches from each band member with harmony vocals and catchy hooks.

Kevin Roper Project. Originally formed in 2006, playing original music in the early Portland jam scene, the band stepped away in 2012. Almost 10 years later and with members independently being active participants in the local scene in many other bands, the timing felt right to "Get the band back together" in November of 2021! The music features the original songwriting, vocals and keyboards by Kevin Roper (Rose Alley, Pardon Me, Doug, Dead Sessions and more) along with Drummer - Neil Carrol (Rose Alley, Now is Now), Lead Guitar - Aaron Stone (A Mighty Lion) and Bass Guitar - Zach Redmann. Led by Kevin Roper's high energy keyboard playing and vocals, this mix of original jam band, Funk, Folk Rock and straight up Rock and Roll will please your ears and your soul!