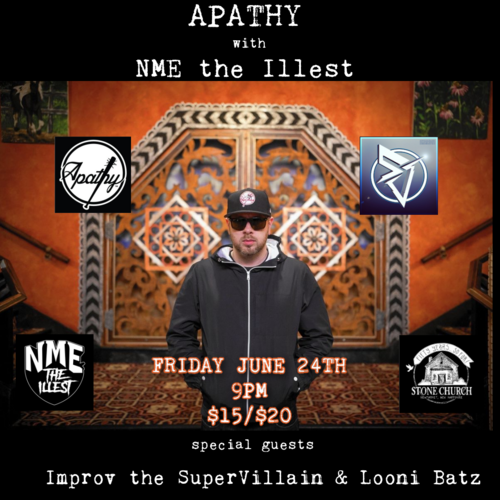 Bio - Being the "King of Connecticut" might not be hip-hop's most illustrious title, but there isn't a state, country or world wide web where Apathy's rap royalty doesn't reign supreme. For 20 plus years, the Army of the Pharaohs member & Demigodz co-founder has wowed audiences and hip-hop purists around the globe with his breathtaking brand of ferocious and multi-stylistic lyrics. Apathy has toured the all acrossed the globe, sharing the stage with Snoop Dogg, Linkin Park, Cypress Hill, Ghostface Killah, Vinny Paz and many more. He may be the King of Connecticut, but the sun never sets on Apathy's throne.

Producing since his young days, New Hampshire native Producer/MC, IMPROV the SuperVILLAIN has been involved in the music scene since 1994. Writing his first song after studying Yo MTV Raps, he was inspired to take the culture into his own hands and start sharpening his skills, by perfecting his craft writing songs.

He would later go on to become recognized in his local area and was booked for shows with Crisis, Napalm, and Looni Batz (Highlanders/Threshold) as well as forming a duo with Outwrite (Knights of the Round Cypher). IMPROV performed at various venues as a hip-hop artist and continued to be heavily involved in the scene. In 2021 he formed the group Turbo Graphic 16’s with SUNY BONEZ and Looni Batz where he is responsible for all the production and mixing/mastering.

His first album, “Sorry about the Ego” dropped in 2006 and was well received. In 2021 he came back with his Sophomore album “The Scheme”.

He has been a major player in the local scene providing production, mixing and mastering, cuts, cameos, and artwork.