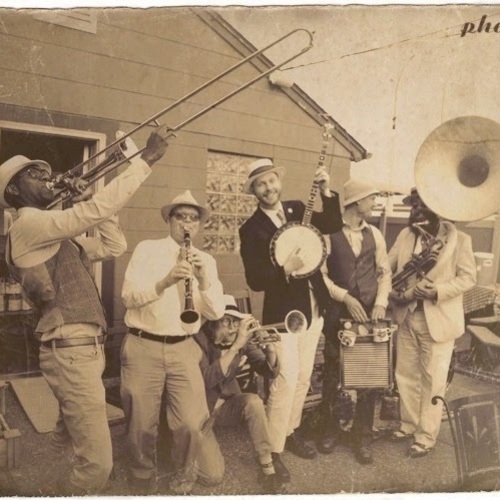 Annie and the Fur Trappers are a Boston based traditional jazz and blues band which formed in 2016. Originally founded in St. Louis, Missouri, the band currently includes clarinet, trumpet, trombone, bass, banjo, guitar, washboard, and violin. Annie and the Fur Trappers is dedicated to performing and preserving the music of the 1920s and 30s today. The band plays traditional jazz, delta blues, ragtime, and swing music. Their version of "Delta Bound" was selected to be displayed at the Mississippi Arts and Entertainment Experience in Meridian, Mississippi. Annie and the Fur Trapper's original song "You Break It, you Buy It" was selected for the St. Louis Blues Society's 17 in 17 compilation album. Annie and the Fur Trappers have performed at a variety of music festivals including the Big Muddy Blues Festival, The Whitaker Jazz festival The Apple Butter Festival, Cherokee Street Jazz Fest, HONK!TX, Musikfest, The Cherokee Street Jazz Crawl, and The Rosebud Cafe Music Festival, to name a few.

The band released their second studio album, Muskrat Ramble, on vinyl in 2019. The album was recorded, mixed, and mastered by Paul Niehaus IV at Blue Lotus Studios. The album includes a number of blues, traditional jazz, and swing favorites, and won an award as “Best Self-Produced Album” by the St. Louis Blues Society. The vinyl was pressed by Standard Vinyl. The band, relocating to the Boston area in 2020 during the global pandemic, the band has been working on recording a new album at PBS studios in Massachusetts. The new CD is expected to release in 2022. Annie and the Fur Trappers is available to play for your function with ease in the New England area, or with travel arrangements wherever you are located.