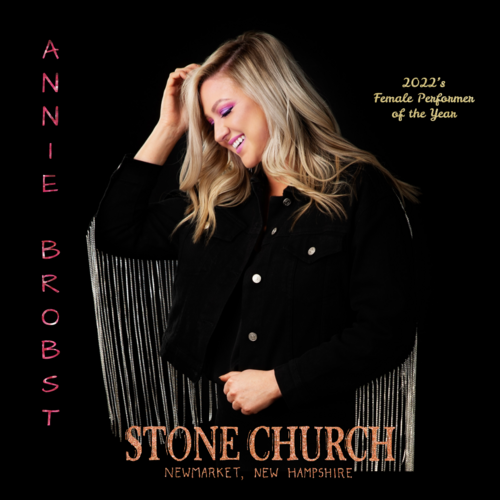 "There are few artists working in New England who approach contemporary country with such a combination of mastery of the genre and accessibility outside the genre's normal audience." writes Victor D. Infante of Worcester Telegram & Gazette about Annie Brobst in his "Favorite Albums of 2021". 2022’s Female Performer of the Year and 2021’s New England Music Awards' Overall Act of the Year, Country Artist of the Year, and Song of the Year winner, Brobst's unique songwriting ranges from traditional country to pop country. With influences like Miranda Lambert, Ashley McBryde and Jason Isbell; she adds a feminine touch to a bro-country sound and a powerful authenticity to storytelling through song. Her musical journey began with her move to North Shore Massachusetts from Columbus, OH in 2007, and has now become one of the most sought after and awarded artists in New England. She’s accumulated over 75,000 followers and videos views in the millions across social media outlets (Facebook, Instagram, Twitter, Snapchat, Bands intown, TikTok, and more) of engaged and devoted fans -The ABB Army! Her debut EP “Ghost” and her full album "My First Rodeo" are currently available on iTunes, Spotify, Amazon Music, and more. She released her latest album, "Where We Holler" on March 30th, 2021, which peaked at Number 2 on the iTunes Country Album Chart and #8 across all genres. All works were recorded with Sean McLaughlin of 37’Productions - an award-winning producer in the New England music scene. Multiple singles from all of her album shave been regularly playing on the "Backyard Country” segment of Boston’s country radio station 101.7 The Bull, powered by iHeartMedia as well as on Kruser's Local Catch on Country 102. 5WKLB.Annie's innovation and creativity led to 3 virtual concert "tours" in the Summer and Fall of 2020 during the pandemic, as well as a sponsored virtual concert series in partnership with a local cafe and national brand, Mike's Hard Lemonade. She totaled over 100,000 digital views from her virtual concerts and 3,000 new followers from around the globe. The music never stopped for Annie Brobst.

"Keith Crocker has played regularly around the North Shore of MA and Seacoast of NH since 2017. He covers songs that span the decades; from the Beatles to Imagine Dragons, Johnny Cash to Chris Stapleton, Elton John to Ed Sheeran just to name a few. Keith is turning heads with some amazing original songs, his great vocals and unique song 'mash-ups.' "