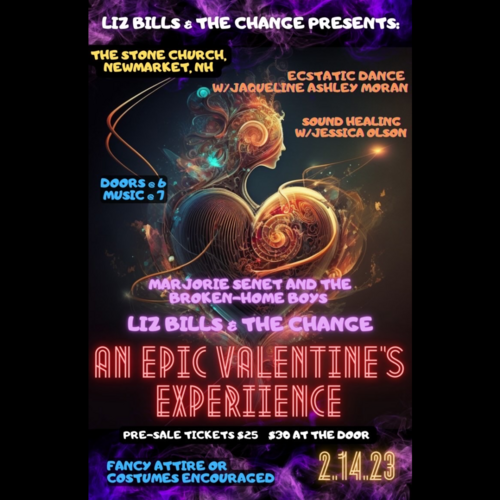 known for their entrancing high energy performances and emotionally charged power vocals, eccentric and theatrical in their songwriting and stage presence; The Change are unapologetically brave yet incredibly vulnerable and real.  Taking you on a magical ride that is intoxicatingly sweet and dangerously ferocious. The Change have been compared to bands such as Heart, Lucius, Led Zeppelin, Grace Potter and The Nocturnals.

Liz’s Highlights include the 2020, 2021 & 2022 Boston Music Award’s ‘Singer/songwriter of The Year’ nomination, winning ‘Pop Act of The Year’ in 2021, ‘Roots Act of The Year’ in 2019 and ‘Rock Act of the Year’ in 2018 for the New England Music Awards, opening for Bon Jovi at Mohegan Sun in 2017, runner-up in the 2016 Aloft Rising Star with Daughtry, and a semi-finals appearance in the WZLX’s 2016 Rock Rumble. Liz was a top 30 female finisher in the 2013 American Idol competition, and has been compared to singers such as Grace Potter, Janis Joplin, Florence and the Machine and Susan Tedeschi.

Marjorie Senet and the Broken-Home Boys

Marjorie Senet and the Broken-Home Boys will take you on an emotional journey of love and loss, set to twangy, rocking, classic country/American roots music. Raised on music blasting from a Seeburg jukebox, Marjorie's influences range in style from Etta James and Brenda Lee to George Jones.

“Her down-home voice and sweet songs of heartbreak might as well have come straight from the Ryman Auditorium days of the Grand Ole Opry.” Said Scott Heron of Folk New Hampshire.