A Book Launch with David Rivard and David Blair

A Book Launch with David Rivard and David Blair 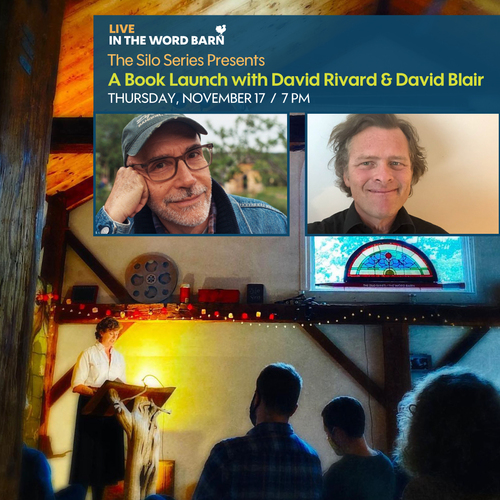 The Silo Series presents a book launch for David Rivard and David Blair, two well-renowned poets and members of the MFA faculty at UNH, on November 17 to celebrate their brand new books.

All proceeds benefit The Word Barn

David Rivard’s Some of You Will Know was published in October by Arrowsmith Press. His earlier books include Standoff, Otherwise Elsewhere, Sugartown, Bewitched Playground, Wise Poison, and Torque. Rivard’s work has won the PEN/New England Prize in poetry, the James Laughlin Prize from the Academy of American Poets, and the Agnes Lynch Starrett Poetry Prize, and he has been a finalist for the Los Angeles Times Book Prize. Among his other honors are fellowships from the Guggenheim Foundation, the National Endowment for the Arts, the Civitella Ranieri Foundation, and the Fine Arts Work Center in Provincetown. In 2006, Rivard was given the O.B. Hardison Poetry Prize by the Folger Shakespeare Library in recognition of both his writing and teaching. He lives on the coast of Maine, and teaches at UNH.

"On some plane of existence

these two scraps are all my news:

where the mess is

that’s where my heart is."

David Blair grew up in Pittsburgh, Pennsylvania. His new book is True Figures, Selected Shorter Poems and Prose Poems, 1998-2021. Blair is the author of four earlier collections of poetry, Ascension Days, Arsonville, Friends with Dogs, and Barbarian Seasons, and a collection of essays. Blair lives with his wife and daughter in Somerville, Massachusetts, and he teaches poetry in the MFA Writing Program at the University of New Hampshire.

The Armies of Being Here

Maybe a college graduate or a student, chunky clubby on hands and knees  squirts tasty bleach on the pedestals of her exercise job purgatory

as if a boxer aimed his spit

at the gym floor

kept plucking dandelion violets from the foors of physical health where people bring their sad bodies, and cell phones, and the half-employed get their euphoria and their yas yas out.