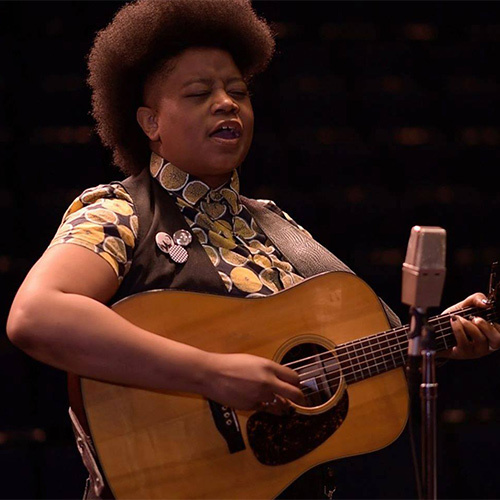 Our Native Daughters, Amythyst's recent collaboration with Rhiannon Giddens, Leyla McCalla, and Allison Russell (Birds of Chicago) has delivered a full-length album. NPR described the opening track, "Black Myself," written by Amythyst, as "the simmering defiance of self-respect in the face of racism."

Amythyst regularly tours the United Kingdom and has performed at Celtic Connections. She has also shined at the John F. Kennedy Center for Performing Arts, and opening for artists such as the Indigo Girls and more.

Provocative and fierce, Amythyst's ability to cross boundaries is groundbreaking and simply unforgettable.

No Depression Magazine says, "Amythyst Kiah is going to be famous...the best way to experience her music is in person. I don't think it's an understatement to say that Amythyst Kiah will remind you what it is to love live music."

NY Times says, "Her razor sharp guitar picking alone guarantees her a place among masters, but it's her deep-hued voice that can change on a dime from brushed steel to melted toffee that commands attention."